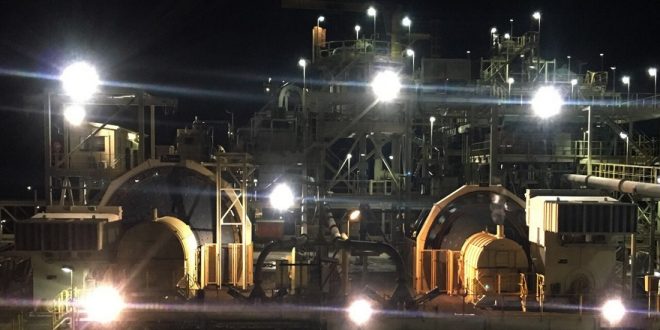 Murray & Roberts Cementation have been appointed by B2Gold to establish the underground stoping horizon at its Otjikoto Mine in Namibia.

Murray &Roberts will be in a joint venture with Lewcor Mining.

According to Allan Widlake, new business director at Murray & Roberts Cementation, mobilisation on site has begun and the contract will take 28 months. Otjikoto Mine is Namibia’s largest gold producer and has been in operation since 2015. The Wolfshag zone at Otjikoto comprises a series of shallow, easterly dipping mineralised shoots that sub-crop below calcrete cover, plunging for a strike length of at least 1,600 metres.

The contract will see a decline of 5 metres wide by 5,5 metres high being driven to the orebody from a portal in one of Otjikoto’s depleted open pits. There will also be two 4 metre diameter ventilation shafts created using raise boring methods. One will measure 200 metres in-depth, and the other 80 metres.

“We will be conducting this project in a strategic partnership with a highly professional local Namibian opencast mining and earthmoving contractor, Lewcor Mining,” says Widlake. “Lewcor is an existing service provider at Otjikoto and is well-regarded by the client and the industry.”

He says the operation will be highly mechanised and efficient, with equipment including drill rigs, dump trucks, load-haul-dumpers and utility vehicles, as well as shotcreting and ancillary equipment. About 150 employees will be active on the project, including a highly experienced crew from a recent contract in Zambia. Most of those involved will be Namibians, who will be trained as part of a special counterpart training programme to transfer skills to local workers.

Widlake says he is excited by the project and the prospect of Namibia offering strategic opportunities in the mining sector, as other mines consider evolving from opencast to underground.

He highlights that Murray & Roberts Cementation is one of the very few companies worldwide with the experience and capability to conduct both development work and raise boring as part of a single package.

“This gives us as the contractor much closer control of our projects, allowing us to reduce our subcontract-related risk,” Widlake concludes.

Previous GV Gold increases production with the help of digital technologies
Next AfriTin Uis mine operating at full capacity, increases output by 79% month-on-month