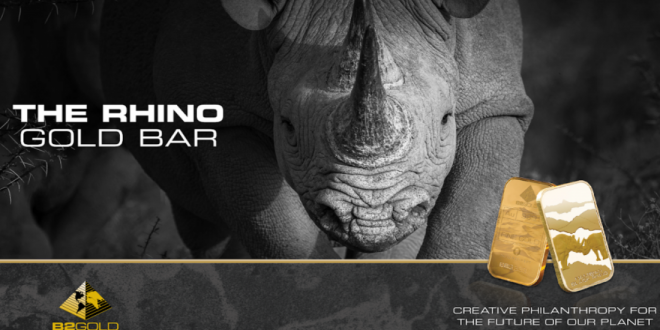 The gold donation is valued at approximately US$1.5 million.

In making the announcement, Clive Johnson, President and CEO of B2Gold, outlined the company’s goal of redefining conservation financing stating that the donation represents the first time that gold, a natural resource from the ground, is being used to provide sustainable funding to community-backed initiatives for the protection of the iconic black rhino, a critically-endangered global treasure.

The 1 000 oz of gold was produced at B2Gold’s Otjikoto gold mine located in Namibia. With this donation, 1 000 limited-edition Rhino Gold Bars in varying sizes will be produced and are available for sale to the public. On the reverse of the Rhino Gold Bar, a black rhino mother and calf is represented, symbols of hope for the future of the species. The obverse shows the Namib Desert, an evocative and recognisable image strongly associated with Namibia.

The Rhino Gold Bars are available for purchase through a third-party at the spot price of gold on the date of sale plus a 15% conservation premium and will be available in 500 gram, 1 ounce and half-ounce denominations.

The proceeds from the sale of the Rhino Gold Bars will be managed by B2Gold and an Advisory Committee, which includes representatives from Save the Rhino Trust Namibia, Integrated Rural Development and Nature Conservation, Namibia Chamber of Environment, and the Namibia Ministry of Environment and Tourism.

The conservation premium will be used to fund the production of a follow-up range of gold bars or coins, which will be distinctly different from the first 1 000 Rhino Gold Bars, ensuring that this ground-breaking initiative remains self-sustaining.

A portion of the proceeds will be invested to provide long-term sustainable financing for black rhino conservation, while significant funding will be applied immediately to conservation actions in the field, including support for patrols, intelligence activities, and to support rural communities for whom the protection of rhinos is their birthright.

Today, the northwest of Namibia is home to the last and largest free-roaming population of black rhinos in the world. Their home is an area of 25 000 km2, with no national park status, few roads and no control over who comes in or out.

The recovery of this population of black rhino is due to the dedication of the organizations and communities that have committed themselves to the protection of black rhinos in northwestern Namibia. A rhino-based economy has developed in Namibia’s northwest, with rhino tracking central to tourism development that in turn provides jobs, income and hope for the future for Namibians.

Previous WearCheck expands in West Africa
Next Coronavirus: Africa might be the biggest loser