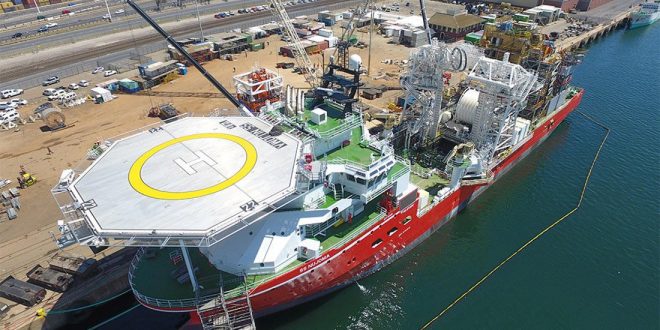 Namibia diamond exploration and sampling mining vessel, the SS Nujoma, will leave the Port of Cape Town on Tuesday, embarking on a two-week period of sea trials.

The mining vessel has been in the Port of Cape Town since arriving from Norway in August, where it was being outfitted with the sampling system, and will ensure sustainable diamond production levels long into the future.

The SS Nujoma has created 140 new direct jobs for Namibians who will operate the vessel.

The sampling system was built in large modules with a combined mass of 2 200 t, in parallel with the construction of the vessel in Norway. These modules were lifted onto the vessel using the second-biggest superlift crane in Southern Africa, with the heaviest module weighing over 220 t.

As part of the project, which is ahead of schedule, the two weeks of sea trials will test vessel performance with the new sampling system and will return to the Port of Cape Town for final completion works. The mining vessel is scheduled to start commissioning in Namibian waters in December.

The SS Nujoma is the sixth vessel of the Debmarine Namibia fleet.