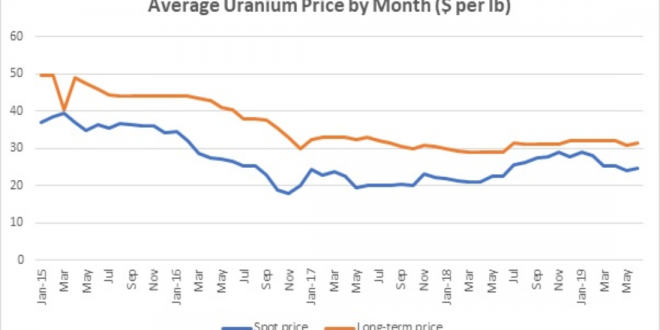 Uranium miner Paladin Energy expects to benefit should there be a substantial increase in the uranium price, following signs of recovery in late 2018, chairperson Rick Crabb said in the company’s annual report for the 2019 financial year, published on Tuesday.

The miner owns 75% of the Langer Heinrich mine, in Namibia, which is said to have reserves that will support “many more years” of production if it resumes production. Paladin put the mine on care and maintenance in 2018, as a result of low uranium prices. It has now embarked on a prefeasibility study to assess options for restarting the operation.

Crabb warned, however, that the timing of a substantial increase in prices still remained elusive owing to a number of factors, both known and some unknown, “given a degree of opaqueness” in the uranium market.

CEO Scott Sullivan, meanwhile, said a lack of clarity over the outcome of the US Department of Commerce’s Section 232 investigation into US uranium imports had weighed on the market for the past 18 months and was only resolved in July, with a rejection of quotas by President Donald Trump.

As a result, a three-month Nuclear Fuel Cycle Review was initiated and some uncertainty still existed in the market and utilities continued to remain out of the term market, Sullivan noted.

While primary production had continued to be short of forecast growth, the uranium price recovery had retracted and temporarily stalled in the shadow of market uncertainty, the company noted.

Notwithstanding, market restructuring continued, with conversion and particularly enrichment seeing notable price increases during the first half of this year.

“We believe these improvements will feed across into the uranium market once the outcome of the Nuclear Fuel Cycle Review has been announced and its impact absorbed by the industry during the course of [the] 2020 [financial year],” Sullivan commented.

The development of new uranium supply to support these programmes continued to be elusive, with forward uranium price indicators well below incentive prices, he pointed out.

Long-term contracting levels have not recovered during this period, further increasing forward uncommitted demand and improving the future prospects of uranium suppliers and developers, Sullivan explained.

He said that, supporting the case for growth, Paladin had also seen the deferral of closure plans for older nuclear reactors in many countries including France, Britain, the US and India, with the realisation that emissions targets cannot be met with these retirements.

“We have seen changing positive nuclear sentiment in countries such as Taiwan and South Korea driven by the population who are concerned about energy security.”

With the absence of operating cash flow for the majority of the 2019 financial year, Paladin had kept discretionary spending focussed on value-adding strategies, such as the Langer Heinrich study and the Kayelekera divestment, Sullivan commented.

Consistent with the company’s strategy of developing opportunities to monetise noncore assets, Paladin executed an agreement to sell its 85% interest in Paladin Africa for A$200 000, A$4.8-million in Hylea Metal shares, a 5% royalty capped at A$5-million and the repayment of $10-million environmental performance bond funds over three years.

Completion of the transaction is dependent on Hylea shareholder approval, Paladin noteholder consent and approvals by the Malawi government.

The transition of Langer Heinrich into care and maintenance had a positive impact on cash flows for Paladin during the financial year, with group net cash flows from operating activities having decreasing by $32-million year-on-year.

In the first half of the year, Paladin bought $10.8-million of uranium inventory on market for a final term contract delivery in December 2018, which generated additional net cash flows of $4.1-million.

During the year, unrestricted group cash and cash equivalents decreased by $13.7-million to $25.4-million, and net debt increased by $26-million to $106.8-million as at June 30.