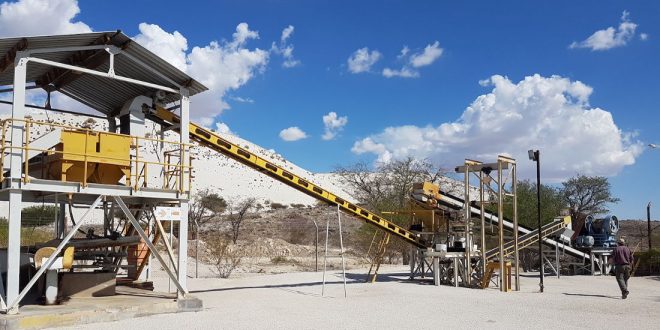 AfriTin Mining has procured the entire front end crushing component for the processing circuit at the Uis tin mine currently under development in Namibia.

The equipment purchased represents the entire comminution circuit for the Phase 1 processing plant from which the company estimates production of approximately 780 tpa of tin concentrate.

Moreover, AfriTin has appointed Namibian engineering firm Crushplant & Utility Spare, which specialises in the construction and installation of crushing equipment, to match the equipment to the required specifications and associated installation at mine site.

AfriTin has made good progress towards its objective of commercial production from the Uis mine later in the year.

So far, the Afritin engineering team have begun work on the infrastructure design for the plant design at Uis. The scope of the team’s work includes civil, structural and mechanical designs and drafting.

The planning work needed to identify, design and begin construction of the plant site will be undertaken through the use of high resolution satellite imagery, that has already been purchased, and topographical interpretation is currently being prepared.

“The availability of the plant and suitably qualified engineers to prepare the plant for operations is a testament to Namibia being a favoured investment destination for the construction of large projects of this nature,” says AfriTin Mining CEO Anthony Viljoen.

AfriTin at a glance

AfriTin Mining is a newly formed company which has acquired the tin assets of Bushveld Minerals in Namibia and South Africa.

Following the successful transformation of Bushveld Minerals from an explorer to a producer, the de-merger allows AfriTin to become the only pure play tin company listed on AIM, says Viljoen.

Comprised of three separate mining licenses, Uis is a brownfield near-term production opportunity, which was once one of the largest opencast tin mine of its kind in the world. The project contains historical resource estimates (non JORC compliant) of over 70 000 000 t of mineralised pegmatite, with approximately 95 000 t of contained tin as prepared by SRK Consulting in 1989.