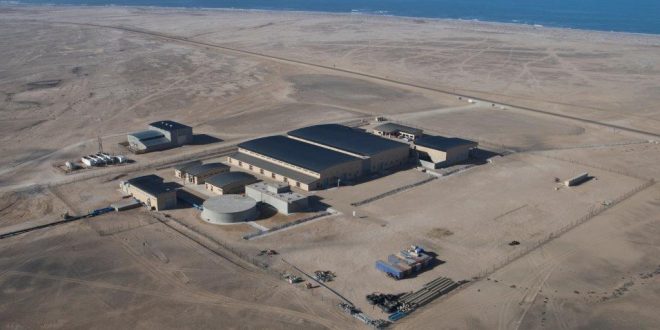 Swakop Uranium Mine says it has lost N$1,9 billion over the past two years because of a French state-owned nuclear company’s inconsistent water supply.

This mine is not the only one complaining.

Both mines are owned by the Chinese government, and both buy water from Orano through the national water company NamWater.

Swakop Uranium chief executive officer Cai Yusheng told The Namibian last month it had lost 86 days of operations because of a lack of water since 2018.

This affected the mine’s contribution to government coffers, which was N$241 million in 2019.

Calculations by The Namibian show Swakop Uranium’s claim that it paid N$241 million indicates it would have generated N$8 billion in revenue that year.

Cai said Orano’s plant could not guarantee an uninterrupted supply of water. This year the mine had only been able to operate from 26 January to 17 March because of a lack of water.

“The water bill, however, continued to run into several millions of dollars – even when no water was supplied. This because of the type of contract between NamWater and Orano, which is one-sided and in the end gets passed on to Husab Mine and Rössing,” Cai said.

“Without any other option, this is like a take it or leave it agreement – if Swakop Uranium does not take it and pay a high price, the only option we have is to close,” he said.

Mining sector sources have questioned why Orano was allowed to maintain a monopoly on the water by being the only desalination plant in the country, as well as the main source of water for the Erongo region.

They are accusing NamWater of protecting Orano by blocking mines from building their own desalination plants.

NamWater has a supply agreement through which it buys water from Orano and sells it to the mines.

Swakop Uranium, which employs 1 750 people and has 500 permanent contractors, said it had asked the government to allow them to build their own desalination plant.

Cai warned that without water security the future of the mining operations could not be guaranteed.

“The majority shareholder of Swakop Uranium [the Chinese government] has over the past years tried to cushion the company by purchasing uranium at above-market prices and thereby maintaining jobs and hoping the mine can achieve some level of acceptable business performance and be self-sustaining,” he said.

According to Cai, Orano had not “made necessary investments in the upkeep and maintenance of the facility to ensure a reliable and constant supply of water”.

“Orano Desalination is plagued by a host of technical and design flaws which has resulted in poor reliability,” he said.

The government has flirted with the idea of setting up a desalination plant for decades.

It has been hesitant to buy Orano’s plant as it feels the N$2 billion price tag is inflated.

Mines minister Tom Alweendo told The Namibian last month he was aware of the mines’ complaints but referred all questions to the agriculture and water ministry.

NamWater has supplied Rössing with water from the Orano plant since 2013.

Rössing Uranium’s spokesperson, Daylight Ekandjo, told the newspaper last Tuesday it had lost 41 production days since 2018 because of the water situation.

Rössing Uranium carried out a study in 2014 to determine the feasibility of building a N$200 million desalination plant for the mine, which was not approved.

The government blocked that plan, forcing the mines to rely on the French-owned desalination plant.

“At the time, the motivation for the project was mostly the affordability of the desalinated supply rather than the sustainability thereof. Sustainability has become increasingly problematic over the last few years, thereby forcing us to do a review of our water strategy which may or may not include a proposal for own desalination,” Ekandjo said.

During 2019 and the first part of this year there were higher than normal levels of sulphur along the coast, De Klerk said.

Otherwise, they had only interrupted the water supply for maintenance, she said.

“We have incorporated the latest technology allowing us to reduce power requirements and ultimately lower production costs. Our agreement is with NamWater and we cannot comment on what they charge their bulk customers,” she said.

“If desalination water is to be pumped to the central areas, the sheer volumes required would demand the construction of more desalination plants at the coast,” she said.

NamWater’s chief executive, Abraham Nehemia, rejected allegations that NamWater was blocking mines from building desalination plants because they are “not a regulator”.

“Naturally, NamWater does not support that mines be issued with permits to supply themselves, because this clearly encroaches upon NamWater’s national mandate,” he said.

He said NamWater had, over the years, been in talks with the mines about building a desalination plant.

“The idea would have been armed with the offtake agreements from the mines. The national water utility could secure financing for such a plant, which would for now be dedicated to the mines, and perhaps the utility would only have self-financed a small portion for supplying to local authorities,” he said.

Nehemia said NamWater could not be expected to spend its resources on building a plant to support commercial mining.

However, such investments could be made, provided there was a commitment from the mines, he said.