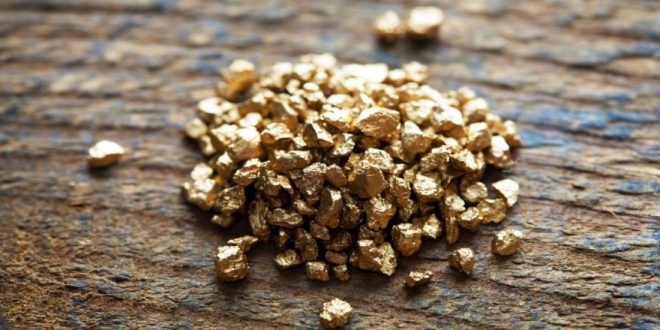 Right under our noses, Osino Resources – managed primarily out of South Africa and listed in Canada – has pulled off a potentially stunning gold find in Namibia.

Osino raised $15 million (R276 million) from Canadian investors in January, sufficient to complete its exploration programme within the next 18 months. The exploration company is targeting an initial resource of 1-2 million ounces with potential upside for much more, and indications so far are that this is now within reach.

“Gold mines of this size are few and far between, which has thrust Osino onto the radars of North American mining investors – but none from SA.”

The gold majors have had a spectacular run over the last two years, with companies like AngloGold Ashanti quadrupling in price. Now the attention is shifting to junior companies with quality assets.

Osino is a junior mining company founded by CEO Heye Daun, a South African resident who grew up in Namibia and served time at AngloGold Ashanti, Rio Tinto and Gold Fields, before striking off on his own (interestingly, he is also the nephew of Steinhoff founder Claas Daun).

With gold prices nudging towards $1 800 per ounce, and the Bank of America forecasting a price of $3 000/oz within 18 months, Osino is being touted by some analysts as a potential 10-bagger (stocks that appreciate ten times their initial purchase price). The share currently trades at 86c, having shot up fourfold over the last 15 months.

The reason for the excitement: the exploration results coming out of the group at its Twin Hills area in Namibia, about 25km from the producing Navachab Gold Mine sold by AngloGold Ashanti in 2014 to QKR. Osino has exclusive rights over an area of nearly 7 000 square kilometres on the Karibib Fault Line, about 200km north-west of Windhoek.

Five of the seven holes drilled at Twin Hills have yielded promising mineralisations, indicating a strike length of 11km. This will likely expand as exploration continues.

A unique aspect of the exploration is that drilling is being carried out through the hard calcrete cover which is common in this part of Namibia.

The samples are sent to Australia for assaying, where a relatively new ultra-low grade detection technology has illuminated what appears to be one of the biggest gold discoveries on the sub-continent in a decade.

This is a shallow deposit, allowing for low-cost open pit mining, and hopefully a relatively inexpensive gravity separation processing method.

This is Daun’s second foray into Namibian gold exploration, the first being the advancement and definition of the Otjikoto resource which was sold in 2011 to another Canadian mining group, B2Gold, for nearly $200 million (R3.6 billion). B2Gold invested nearly $300 million (R5.5 billion) to develop the mine, which last year produced 178 000 ounces, roughly 20% of the group’s total gold haul for 2019.

The sweet spot for any new gold mine is a resource of at least one million ounces. With gold prices now on the rise, investors are scrambling for good assets. This puts Osino in the pound seats.

There are hundreds of junior mining companies, many of them operating out of Canada, but it is also a field strewn with dodgy characters. As Mark Twain remarked: “A gold mine is a hole in the ground with a liar standing on the top of it.”

“The only way to survive as a junior mining company is build a solid track record and we have that,” says Daun. “Our investors are highly respected and our geological team, led by Jon Andrew and Dave Underwood, is among the best in the business. This explains why we have managed to close four separate rounds of funding, the latest being $15 million, which we secured in January.”

Osino was the first to explicitly apply the so-called orogenic approach to gold exploration in Namibia. This implies a geological approach based largely on structural geology and a new understanding of how fault lines occur and how this can point to the location of mineral deposits.

Historical gold exploration in Namibia tended to be model-driven and somewhat dogmatic and Osino’s open-minded, first-principles based exploration approach has now yielded fruit where large mining houses previously working this area were oblivious to the riches beneath their feet.

The Damara sedimentary belt on which Twin Hills is located is part of the Pan-African belt which extends through East Africa to Sudan and Egypt, and has been known for more than 100 years as a heavily mineralised belt containing copper, uranium, gold and other minerals.

It wasn’t exactly a hunch (or near-ology, as it is often referred to in the industry) that got Daun and his team to start looking in the area – but almost.

The fact that Twin Hills is located about 25km from the functioning Navachab mine meant it was a reasonable bet that gold was likely much more widespread. Taking into account that orogenic gold systems usually occur in clusters and not just in isolation, Underwood, Osino’s head of exploration, directed the company to start looking along the large, regional structural trends connecting Otjikoto and Navachab, which bookend Osino’s licence holding.

He assumed that gold could also occur in sequences that had previously been overlooked and Osino thus started a large regional soil and calcrete sampling programme.

In these desert conditions, millions of years of surface evaporation of ground water pulls tiny particles of gold to the surface, giving an indication of what’s lying beneath – which is exactly what was found.

Unlike the thin hard rock veins found in the Free State and Witwatersrand, the gold in Twin Hills is disseminated in tiny fragments over a very large area.

In 2018, Osino’s soil sampling indicated that it had hit the motherlode and Daun went to Canada in search of funding to allow for the start of a drilling programme. “We got the funding we needed and then started drilling holes every 25 metres, going down to depths of five to 20 metres,” says Daun. “It was at this point we realised the extent of the mineralisation.”

Although no formal resource modelling has been done yet, the footprint and grades of the discovery so far indicate the potential for a 1-2 million ounce deposit with significant further upside. Daun is confident further exploration will see this increase. Osino plans to rapidly advance the project to feasibility stage and then to seek an operating partner or even on-sell to a mining major, as Osino’s founders did previously.

Based on a rule of thumb calculation of $100 million for one million ounces, the deposit could fetch $200 million to $300 million (up to around R5.5 billion).

As was the case with the other two Namibian gold projects, further exploration and infill drilling should also lead to an increase in grades by discovering further high grade zones and extending the ones already identified.

Operating in Namibia has two major benefits: it is cheap to mine due to likely easy metallurgy and the weak exchange rate allows for cheap operating costs.

US dollars go a lot further in Namibia when converted to local currency than they would in most other countries.

Osino trades on the Canadian Stock Exchange at 87c a share. It is difficult to value junior mining companies with no cash flow, so a useful rule of thumb is to assess what other investors are paying. The initial investors bought their shares at 20c in 2016, followed by another round at 38c in 2017. The latest round in January 2020 for $15 million was concluded at 78c a share, only slightly better than the current share price of 85c.