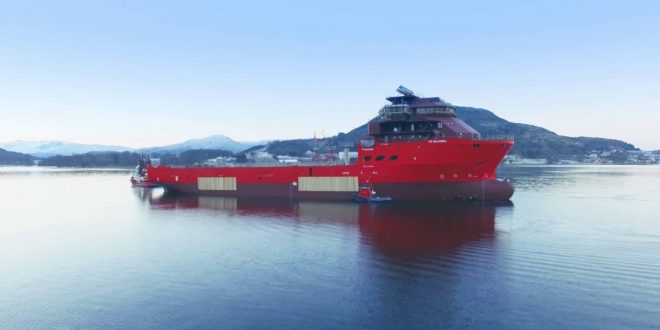 The ship has spent the better part of a year in and around the Cape Town harbour where it was fitted with customised rigging and tested extensively to ensure it can operate uniterrupted in the rough South Atlantic where the exaggerated swell is a natural factor that must be contended with in any marine mining opertation.

The N$2.3 billion vessel, named in honour of Founding President, Dr Sam Nujoma will play a major role in the output of Debmarine, the equal partnership between the De Beers Group and the Namibia Government, that exclusively targets offshore diamond resources. Debmarine produced approximately 1.2 million carats in 2016, a figure which is expected to rise substantially when the SS Nujoma is deployed.

The commissioning of the 12,000 tonnes diesel electric vessel added another 140 permanent jobs, filled mostly by Namibians.

The De Beers Group said Debmarine is the only company in the world to mine diamonds offshore, having started in 2002. The mining is done in water depths of between 120 to 140 metres.

At 113 metres long, the SS Nujoma can accommodate a crew of 80 and has a helicopter deck suitable for Sikorsky S61s. It was constructed in Ulsteinvik, Norway and fitted with its subsea sampling system, designed by De Beers Group, in Cape Town.

The mv SS Nujoma is the first in the company’s fleet of six vessels to be dedicated to exploration and sampling. It incorporates a range of unique technologies that enable it to sample faster, take larger samples and collect more information per sample than any other diamond sampling vessel.

De Beers Group CEO Bruce Cleaver said: “Offshore diamond mining is becoming increasingly important in meeting global demand for diamonds as many of the major onshore deposits have now been discovered. The mv SS Nujoma will allow even more of Namibia’s high quality offshore diamonds to be discovered and mined, ensuring a strong future for Namibia’s diamond industry, as well as the global diamond market.”

Debmarine CEO Shikongo praised the “exceptional efforts” of those involved in the construction, fitting and sea trials, delivering the vessel three months ahead of schedule and on budget.