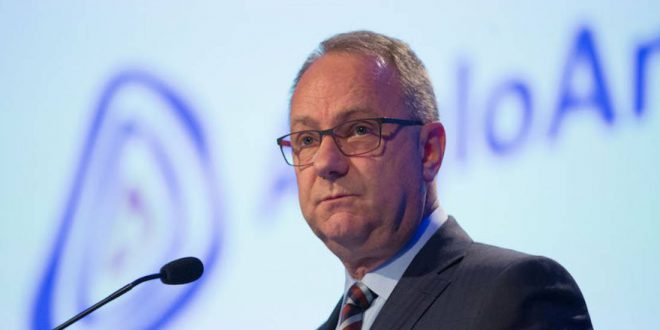 A sharp rise in rough diamond production at a time of stable diamond trading conditions has boosted diversified mining company Anglo American in the three months to June 30, when overall production was 8% up on a  copper-equivalent basis.

Operational improvements increased iron-ore volumes from the Sishen Mine of Kumba Platinum by 38% and the Opencast Mogalakwena mine of Anglo American Platinum(Amplats) made the London- and Johannesburg-listed company’s quarterly highlights list, with a 15% output rise on higher grades and increased throughput.

Copper production from South Africa stood still on mine stoppages at El Soldado that higher Los Bronces production could only partially offset, and metallurgical coal production from Australia fell 19% on Cyclone Debbie’s disruption of the Rail network, two longwall moves and ongoing geological issues at Grosvenor.

The sale of the Rustenburg Platinum Mine to Sibanye last year resulted in Amplats’ managed-mine platinum production decreasing 25% to 283 700 oz.

But this was made up for by the purchase of Platinum  concentrate from Sibanye. Excluding Rustenburg, own mined production rose 7% and Platinum metal in concentrate rose by 5% to 617 100 oz. (See separate report on Amplats).

At the newer Kolomela mine,Iron-ore production rose 11% to 3.5-million tonnes, taking Iron-ore export sales from both operations to an 8% higher 9.4-million tonnes.

Iron- ore production from Minas-Rio in Brazil rose 24% to 4.3-million tonnes as the operation ramps up to operating capacity.

Manganese ore production increased 7% to 843 300 t, 9% more coming from the South African operations and 5% more from the Australian operations.

South Africa’s primary export thermal coal production fell by 8% to 4.1-million tonnes on operational challenges at Khwezela, associated with the integration of the Kleinkopje and Landau mines.

In addition, there was a production fall from Mafube owing to the mine transitioning to a new pit.

Eskom-related steam coal production increased by 3% to 6.9-million tonnes, and the Eskom-tied New Vaal, New Denmark and Kriel mines are on track for sale to the black-controlled Seriti Resources by year-end.

Full-year production guidance for Export thermal coal from South Africa and Cerrejón remains unchanged at 29-million tonnes to 31-million tonnes, with expectations that it will be at the lower end of this range because of the operational challenges at Khwezela.

Export metallurgical coal’s production guidance for the full year remains at 19-million tonnes to 21-million tonnes, with expectations that it will be at the lower end of this range because of geological issues at Grosvenor.

Orapa’s production increase of 44% on Plant 1’s emergence out of care and Maintenance was offset by Jwaneng’s 3% production fall.

Production from Namdeb in Namibia rose 32% to 0.4-million carats on the availability of Debmarine Namibia’s Mafutavessel, which was on extended in- port maintenance in last year’s corresponding quarter.

Sales volumes were hit by temporary Port closures in Chileowing  to poor weather conditions and heavy tidal swells limiting vessel availability, as well as by higher arsenic content in Copper concentrate from Collahuasi which restricted sales into China.

Nickel production increased by 2% on stable smelting at Barro Alto but output from codemin fell 4% to 2 200 t owing to maintenance.

“Through the improvements we’ve made to our portfolio and the efficiencies we are driving, we continue to unlock the potential,” said Anglo CEO Mark Cutifani.

“The production ramps at Gahcho Kué, Minas-Rio and Grosvenor are also contributing to these ongoing positive performance trends.

We’ve increased the full year production guidance for Kumba Iron Ore and are on track to deliver full year guidance across the rest of our products,” He concluded,Anglo’s mining operations, growth projects and exploration and marketing activities extend across Southern Africa,Southern America,Australia,North America,Asia and Europe.