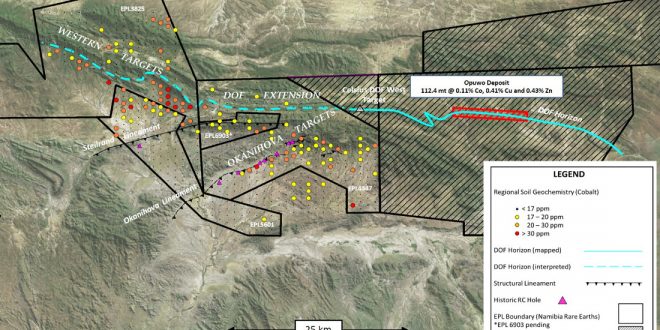 Namibia Critical Metals has announced that flight operations have begun for the Combined airborne electromagnetic and magnetic surveys over the Kunene cobalt-copper project have begun.

SkyTEM Surveys ApS  carrying out the assessment will  increase the survey from 670 km2 to 720 km2 comprising 4 000 line kilometers at a flight line spacing of 200 meters.

According to Namibia Critical Metals developers of Kunene cobalt-copper project, the objectives of the survey are to detect conductive horizons and sulphide accumulations associated with cobalt-copper mineralisation to depths of 300-400 meters, and to assist with geological mapping and structural interpretations.

“The investment we are making in this high powered airborne EM survey, coupled with our continuing geological mapping programme on the ground will provide our exploration team with the best possible tools to prioritise drill targets and increase the opportunity for an early discovery at Kunene,” said Namibia Critical Metals, Don Burton.

The survey scheduled to be completed in early August is to be followed by an initial 7 500 m drilling programme and field teams have been mapping priority target areas in advance to assist in interpretation of geophysical anomalies.

“SkyTEM will deliver data updates from the field on a bi-weekly basis which will allow the team to immediately deploy to areas of interest as we see geophysical anomalies developing,”  Kunene said.

The Kunene project area is contiguous with ground held by ASX-listed Celsius Resources who announced a maiden JORC compliant mineral resource at Opuwo on 16 April 2018.