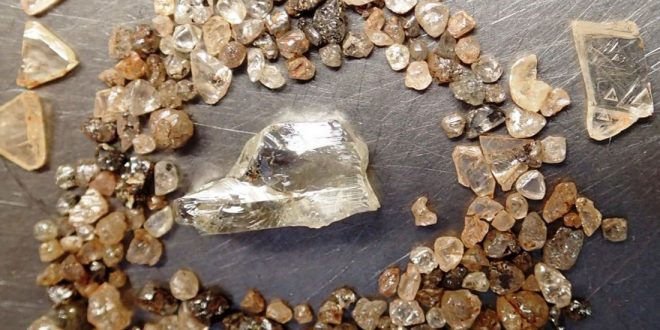 International diamond group De Beers has reported total production increased by 15 percent to 8,5 million carats during the first quarter of this year.

In Canada, Gahcho Kué, which had achieved its ‘nameplate capacity’ in 2Q17, saw a 69 percent increase in production during the first three months of this year. This resulted in an output of 1,1 million carats.

Botswana, where the group operates through its subsidiary, Debswana – a 50:50 joint venture with the Botswana government – saw production rise 12 percent to 5,8 million carats. Output at the Orapa operation jumped 26 percent to 2,8 million carats. This was the result of an increase in the amount of ore treated, which in turn was the result of “sustained healthy trading conditions”.

Production in Namibia rose by 12 percent to 528 000 carats as a result of mining higher-grade ores at the land-based operations. In Namibia, De Beers operates through another subsidiary, Namdeb, which is also a 50:50 joint venture with the Namibian government. De Beers’ marine diamond mining activities in Namibia are handled by Debmarine Namibia, which is another 50:50 joint venture between the group and the Namibian government.

In South Africa, the group operates through De Beers Consolidated Mines, in which the De Beers group has a 74% shareholding. Production was just about static, compared with 1Q17, at 1,1 million carats.

These figures were the outcome of two diamond sales, designated ‘sights’ by De Beers.

“In addition to the difference in the number of sights over the period, sight 1 2017 also saw unusually strong demand for lower-value goods, following the effects of Indian demonetisation in Q4 2016, leading to a higher-than-normal sales volume,” observed the group.

The De Beers group is involved, through various subsidiaries, in exploration, mining, rough diamond sales, retail (with brands) and advanced materials development. In addition to its share in Debswana, the Botswana government owns 15 percent of the De Beers group, the other 85 percent being held by Anglo American plc.