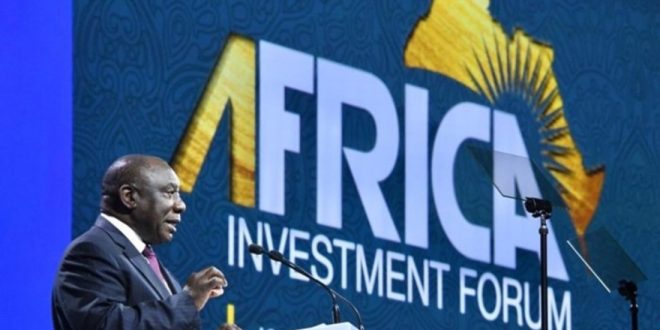 Africa must benefit the most from mineral wealth-Ramaphosa

Evans Mumba November 14, 2019 Africa, Business, News Comments Off on Africa must benefit the most from mineral wealth-Ramaphosa 320 Views

President Cyril Ramaphosa says the time has come for Africa to benefit from its mineral wealth and be a producer of value-added goods.

The President made the impassioned plea during the opening ceremony of the second Africa Investment Forum at the Sandton Convention Centre in Johannesburg.

Approximately 2 000 delegates – among them African governments, sovereign wealth funds, the private sector and financial intermediaries – will converge over three days to find ways to unlock the continent’s untapped economic potential.

Last year, 350 investors from 53 countries participated and funding was mobilised for several projects across the continent.

“This is an indication of the breadth of investment opportunities that exist in Africa — in mining, oil and gas, infrastructure, agricultural production, manufacturing, renewable energy and a range of other sectors,” said President Ramaphosa.

Much of the economic progress over the last few years has been made possible by developments in the political sphere, he said.

The President bemoaned that Africa’s rich resources were under colonial rule plundered and shipped off to foreign destinations, leaving countries impoverished and underdeveloped.

“Today we are faced with a new challenge of being net importers of products and goods that could be produced domestically. This puts pressure on national balance sheets and diverts economic priorities away from vital social spending. We want to reverse this.

“We want to produce our own food to feed our people. We want to generate our own energy. We want to see greater local beneficiation in our mining and minerals industries,” said the President.

The continent, he said, wants to produce its own goods for domestic markets and export.

An environment fit for investment

He lauded 2019 for being a good year for the consolidation of democracy across the continent, with several peaceful elections held in various countries.

“Global investor surveys consistently highlight political stability and security as important considerations for committing capital. Every election that passes peacefully, and that reflects the will of the people, is another step towards the attainment of the African Union’s vision of an Africa at peace with itself,” President Ramaphosa said.

This, he said, challenges the notion that Africa is unstable and a risky place to invest.

Political stability in several African countries has enabled the continent to industrialise and pursue development policies that have brought millions of civilians out of abject poverty.

Africa has over the years made significant strides in pursuing growth and development and charting its own course.

“[We now] stand on the cusp of a new era of African integration,” the President said.

He said the coming into operation of the African Continental Free Trade Area (AfCFTA) greatly benefits the continent’s population, as the agreement will pave the way for the free flow of goods and services, enabling businesses and entrepreneurs to access new markets.

“Consumers will benefit from the removal of trade barriers and business costs will be reduced.”

According to the President, the most significant potential of the AfCFTA will be in increasing the value of intra-African trade, which is estimated to likely rise by 15% to 25% by 2040.

“We must contribute to our own prosperity as we position ourselves to be the critical cog in the rebalancing of the global economy. Investment is a fundamental basis for sustained economic growth. It supports local businesses and industries. It creates jobs for our citizens and enables them to improve their quality of life,” said President Ramaphosa.

He said the continent is acutely aware of the immense challenges it still faces of overcoming poverty, inequality and underdevelopment.

He also acknowledged that weak economic growth still constrains the abilities of many African economies to increase social spending on poverty alleviation, among other things.

“We also know the continent has a massive infrastructure backlog,” he said.

Infrastructure, President Ramaphosa said, is a vital driver of economic growth that the continent needs to prioritise to attract investment, however, government cannot achieve this alone.

The finance institutions must assist African countries in developing credible infrastructure project pipelines in line with continental priorities, guided by the ‘High Five’ priority areas of the African Development Bank.

“We must adopt innovative measures to crowd-in private capital, including through public-private partnerships, to speed up economic and social infrastructure development. This must be done in a manner that promotes greater regional integration,” the President said.

He said the time has come for Africa to move with speed to unlock potential and attain the promise of the Free Trade Area.

“Africa is a continent ripe for investment and brimming with opportunities. Across Africa, economic reforms have been enacted to boost investor confidence, broaden access to local economies, strengthen institutional capacity, remove bureaucratic and other investment impediments, and to clamp down on corruption.”

In his welcoming address, Gauteng Premier David Makhura implored African businesspeople to be the first to seize the immense opportunities in infrastructure.

African governments, he said, should focus on creating regulatory environments and a governance culture that attracts, facilitates and catalyses private sector investment into the African economies.

“Africa is endowed with major resources such as its minerals and agricultural resources. However, our continent’s greatest resource is its people – its youthful population and entrepreneurial and resilient women.

“Investing in education, healthcare and promoting the sustainable funding of small, micro and medium enterprises into which women and young people are involved is crucial for the future of Africa,” he said.