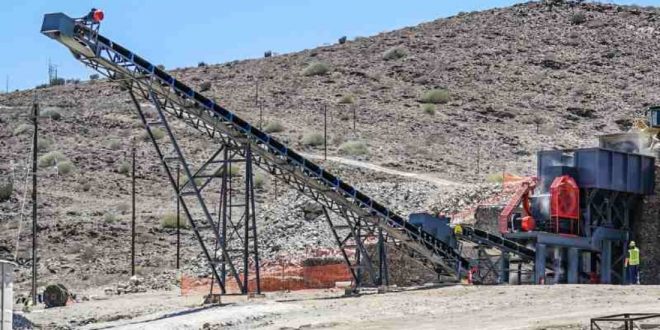 Once the largest hard-rock tin mine in the world, production at Uis, Namibia, came to a halt in 1990 following a global crash in tin prices in the mid-1980s.

In 2016, Bushveld Minerals acquired the Uis tin assets in Namibia and subsequently demerged their tin assets into a dedicated tin company, listing on AIM as AfriTin in 2017.

In recent years, AfriTin has made remarkable progress, with 2019 being highly eventful following first production of tin concentrate in August. CEO Anthony Viljoen tells Gerard Peter about this lucrative project and the potential it holds going forward.

After Uis was closed, the rights for the mine reverted to the state. Over the years, many companies looked at the mine, particularly the dumps with a view on retreating these, however, nobody considered the actual geology of the area and the potential that it holds until Viljoen and his team came along. A resource estimate was done by SRK back in 1989 which projected a 70-year life of mine at Uis.

“We looked at various tin regions across Africa to identify a substantial deposit, but our focus has always been on southern Africa. We had always known about Uis because it was such a significant global tin supplier back then, but many experts said that all the historic reserves had been mined out. As such, we never took it seriously until a geologist called me and said that I need to look at what he had discovered. Needless to say, we were blown away with was there,”

Going for the low-hanging fruit

Currently, Uis consists of three project areas in the Erongo Region of Namibia, all with historical production. The project areas are fully permitted for large scale mining and offer near-term production with low stripping ratios when AfriTin moves into full-scale, commercial mining.

According to Viljoen, initial mining will focus on exposed ore zones within the old mining footprint as well as virgin pegmatite outcrops to keep waste stripping to a minimum.

Following production of the first tin concentrate in August – part of a large pilot-scale production first phase, Uis is currently nearing the end that comprises a four-month ramp-up period to produce 500 000 tpa of tin ore which will produce 65 tonnes per month of tin concentrate.

Viljoen is confident that the mine will reach steady-state production by the end of this year.

“Our primary focus is on supplying tin concentrate so the big value of Uis is digging the ground and producing a concentrate of 65% tin metal. From that stage to the smelting process, the margins are not comparable to mining and selling concentrate, so it’s not worth our while setting up a smelter,” he adds.

To that end, in August, AfriTin announced that it entered into a 12-month off-take agreement with Thailand Smelting and Refining Company (Thaisarco), one of the largest smelters in the world.

With the declaration of a JORC resource, ramping up on schedule, an off-take agreement in place and a £2.4 million facility with Nedbank Namibia for working capital requirements, Viljoen is confident that the company has solidly achieved its objectives to date. So how did AfriTin get it right, so quickly?

Viljoen puts this mainly down to the company’s philosophy and its structure.

“When we listed two years ago, I shied away from traditional ways of relying on contractors and consultants and brought my technical team in-house – people that I worked with for several years,” he states.

“What this has allowed me to do is build a mining company around the team as opposed to the other way around and this has already borne fruit.

“Also, when it came to Uis, we elected to go for a fast track start and take a phased approach. We have built a Phase One pilot plant with a view of creating early cash flows and building our Pre-feasibility Study. As such, we have elected to go into the old pits and to mine there first.

“We will continue our phased approach while we are in parallel focus on finding deposits that can ensure a longer mine life.”

The right place at the right mine

Viljoen also explains that Uis is coming along at a time when the global tin market is starting to bear greenshoots.

“Call it being at the right place at the right time, but we could see a pinch point coming in the tin market. For example, a study by MIT on which metals are critical to the energy revolution puts tin ahead of other energy metals.

“It cites an emerging market opportunity for tin in lithium-ion batteries and indium tin oxide for touch screen and display technologies. If fact, the International Tin Association says demand for the metal could triple by 2050,” he states.

Viljoen adds that many may think of tin’s use in consumer goods such as cans etc., but its underlying use is in semiconductors for electric boards. Granted, this market has slowed down due to geopolitical factors, but Uis is still in good standing because tin is such a unique element with a variety of uses.

“Also, once the US-China trade war ends, we will see an uptick in demand for tin in the semi-conductor and cellphone markets.”

Meanwhile, on the supply side, traditional producers such as China and Indonesia have cut production while the Latin American producers are running short of reserves.

As such, Uis can take advantage of market situations as there are not many tin deposits that can be mined on an industrial open cast scale.

As such, these can both be sold as by-products while mining tin. There is also the possibility of exploiting other minerals such as feldspar and beryllium, Viljoen adds.

“Its early days but we have a fully-fledged mining licence which extends over 225 km² and most of this region has not been exploited. The amount of tin, lithium and tantalum is remarkable and the grade is good. We are excited about the project,” concludes Viljoen.