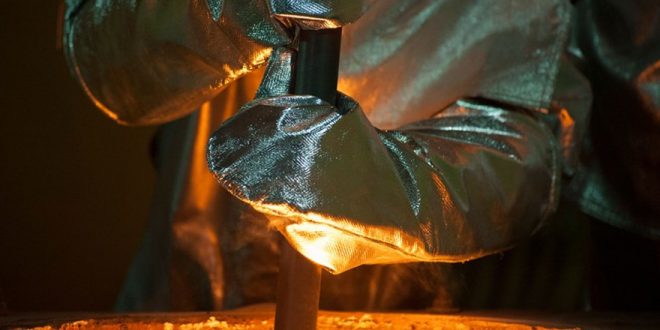 Otjikoto operation is fulfilling its purpose as B2Gold’s African dream asset after delivering record production volumes in 2016 – with similar expectations on the cards.

Triple-listed international gold miner B2Gold Corp. (B2Gold) is celebrating record production volumes (and process plant recoveries) at its Namibia-based open cast Otjikoto operation – well above initial output expectations when the mine started producing in December 2014. While this in itself is a massive achievement for the company, B2Gold is already looking towards the future with aspirations to develop an underground mine at the nearby operating Wolfshag deposit.

While it took B2Gold only three years to deliver the gold-producing Otjikoto after acquiring the Greenfield project late in 2011, the mine’s journey since then has continued with equal if not greater momentum.

It is located approximately 300 km north of Windhoek between Otjiwarongo and Otavi and is owned 90% by B2Gold and 10% by EVI Mining, a local empowerment group.

When first built, Otjikoto was designed to comfortably deliver around 140 000 ozpa of open cast gold resources from a 2.8 Mtpa ROM rate for just over 12 years. A simple expansion to the process plant, completed around mid-2015, saw its production capacity output increase well above this to its current 3.3 Mtpa ROM and 165 000 – 175 000 ozpa of gold (which is even higher than intended from the expansion and the forecast for 2017). The mine produced 166 285 oz of gold for the 2016 year.

“This is a phenomenal achievement considering the expansion simply entailed incorporating additional leach tanks, pumps and large diameter pipes – successfully implemented to the point where it now outperforms the planned 365 tph and delivers around 420 tph,” says B2Gold Namibia MD Mark Dawe. “We have also increased our mining equipment fleet to accommodate these higher volumes and will add another five mining trucks and a 250 t excavator during the year to ensure we continue to operate comfortably.”

The latter half of 2015 also saw B2Gold introduce its nearby B2Gold-discovered Wolfshag deposit into its production mix. Dawe describes this as a “very rich ore body” strategically ideal to blend with the Otjikoto pit’s lower grade ores (0.6 to 2 g/t) and improve overall grade recoveries. Consequently, the operation is expected to average about 1.59 g/t in 2017. Wolfshag also opens up the potential to process older stockpiles as the mine ages – thereby increasing the overall ounce profile of the mine quite significantly.

Dawe also attributes Otjikoto’s overall operating success to the process plant (design and built by B2Gold management and Lycopodium). “We have some of the highest overall metallurgical recoveries in the world – over 98% generally and sometimes close to 99% recovery.” This is thanks to the mine’s geology, easily liberated gold mineralogy and high proportion of coarse gold, but more so because of the unconventional and “unique” plant design which sees all the milled product processed through the gravity circuit before being leached.

We have some of the highest overall metallurgical recoveries in the world – over 98% generally and sometimes close to 99% recovery,” Mark Dawe

Underground potential on the cards

While the Otjikoto project has a 10 year proven lifespan based on current reserves and resources, it will likely extend beyond this period as the mine’s exploration drilling programme advances.

“Our drilling programme is progressing well – we’ve picked up down-dip extensions at both Wolfshag and Otjikoto and are in fact evaluating the feasibility of developing an underground operation at Wolfshag as well which will extend beyond the bottom of the pit, designed to be about 250 m deep ultimately,” Dawe notes.

Two broad high level scoping studies have to date already been completed and require more substantial hydrogeological investigations to determine the possible impact on mining from a nearby aquifer. “We also need to ensure that the structural geology supports an underground mine and model the ore body and evaluate costs based on productivity and the degree of ore generation. Ultimately, I hope a final decision will be made on this project by the end of the year.”

Should Wolfshag underground materialise, it will serve to maintain Otjikoto’s production for a longer timeframe, as opposed to an increased production output. And because the Wolfshag and Otjikoto pits will ultimately intersect, developing a decline from the Otjikoto side is an option being evaluated. “Should all aspects of the project proceed according to plan, development of our underground mine could start as soon as 2018. This is important considering it takes years to build the necessary infrastructure for build an underground mine.”

Dawe is a long-term resident of Namibia and believes it to be one of the top African destinations to live and do business in, especially in the mining industry which is not heavily impacted by bureaucracy. “Government does like to review legislation from time to time but government recognises and acknowledges our contribution to the economy and is willing to engage openly with the mining industry on policy changes,” Dawe states.

Employing a majority local staff complement (98%) is only the start of B2Gold’s ‘give back’ contribution to Namibia. “Our corporate social investment (CSI) programmes are the best in-country and very much a focal area and core philosophy for the company. We focus on community livelihood, health, education and environment and conservation,” Dawe highlights.

In support of these initiatives, B2Gold Namibia has established the Namibian Chamber of Environment (NCE), stemming from the identification and need to support local non-government organisations (NGO) through the integration of industry professionals with government. “Similar initiatives in the past have failed due to a lack of core, sustainable funding but to ensure this doesn’t happen, B2Gold has provided start-up capital for the Chamber; it is our hope that it will become self sufficient in the near future. We have one of the world’s top environmentalists, Dr Chris Brown, involved together with almost every environmental/conservation NGO in country – including 40 NGO members and the Permanent Secretary of the Ministry of Environment and Tourism. This is a unique contribution to the environment by mining and has been so well received in Namibia that the model is being exported to South Africa and other African countries,” Dawe enthuses.

Further to this the company has also invested in establishing and protecting an 18 000 ha nature reserve which incorporates an environmental education centre which thousands of children visit to learn about indigenous flora and fauna. Camps on site also provide survival training and are free of charge for children. “We also use the facilities for corporate team building from which all money earned is reinvested into the centre.”

Finally, B2Gold has introduced a Colorado State University-initiated programme known as ‘Little Shop of Physics’ through its education centre as well which aims to teach children and teachers about maths, science and chemistry. Implemented at the beginning of 2016, it has been such a success that the Ministry of Education has asked the company to roll out the programme across the country.

B2Gold has a strong (60 personnel) exploration team that has discovered some exciting gold prospects in Namibia outside of the Otjikoto operation. Dawe says that drilling results from one asset in particular, about 250 km away from the mine, is showing a lot of potential and generating a lot of interest. “Namibia is the gem of Africa and our experience here to date has been extremely positive. As such we are keen to develop another mine in the country.”