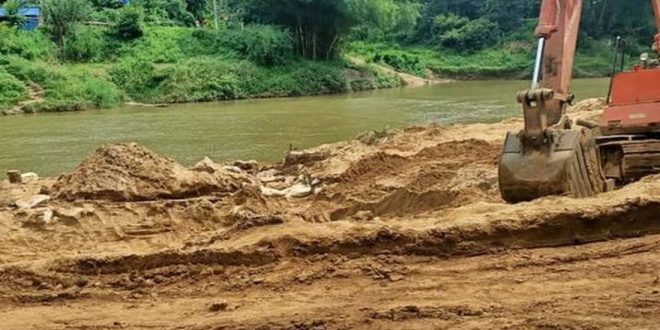 The sum of N$300 payable as an application fee for the ECC is undeniably poor, according to Environment Minister Pohamba Shifeta, and is currently under review due to the significant workload involved in administering the applications.

Shifeta made the comments in the National Assembly last week when he was responding to questions posed by Popular Democratic Movement (PDM) parliamentarian Johannes Martin on issues relating to sand and gravel mining activities at the Epale in the Oshikoto region.

Martin argued the application fee to acquire the ECC is N$300, while to appeal an issued certificate costs the appellant N$1 000.

The N$700 difference, he said, is sometimes unaffordable to community members who wish to appeal illegally issued sand mining certificates. Martin feels with this inconsistency, the ministry is encouraging sand mining.

Shifeta responded that the application process incurs a lot of other expenses for proponents, linked to amongst others the consultative processes and studies required.

“In the past, it has previously been raised in this August House that this process is already too expensive and beyond the reach of many SMEs and smaller companies,” he said.

He clarified the amount of N$1 000 payable for appeals, saying it is certainly not intended to discourage appeals and has been kept low to allow all citizens to afford such services.

“It is also low when compared to the amount of work and resources required to effectively administer appeals. Any person intending to appeal is also likely to incur legal expenses linked to the appeal and therefore N$1 000 is unlikely to be prohibitive to prospective appellants,” he noted.

Martin also wanted to know how former Oniipa constituency councillor Jerry Ngwena got permission to sign documents for a sand mining project when he does not have the power to do so.

Shifeta replied that Ngwena was a member of the Oshikoto Regional Council and a political head of the Oniipa constituency within which Epale district is located.

To address concerns relating to the regulation of sand mining, the environment ministry has engaged extensively with traditional authorities, regional councils, local authorities and other stakeholders.

A new sand and gravel mining questionnaire was developed in 2018 as a key step in the application process for the ECC.

This requires all sand mining applications to be approved at all levels of traditional leadership and the regional leadership before final approval by the office of the environmental commissioner.

Furthermore, it has been resolved that sand mining must not take place in crop fields to protect the livelihoods of local farmers and also not to compromise food security.

The ministry through the office of the environmental commissioner has issued ECCs in three regions concerning sand or gravel mining activities.

In Oshikoto, a total of four ECCs were awarded, and these applications are currently under review.

Previous Digitalization, an essential part of the X-Energy Solution
Next ReconAfrica unlocks petroleum potential in the Kavango basin