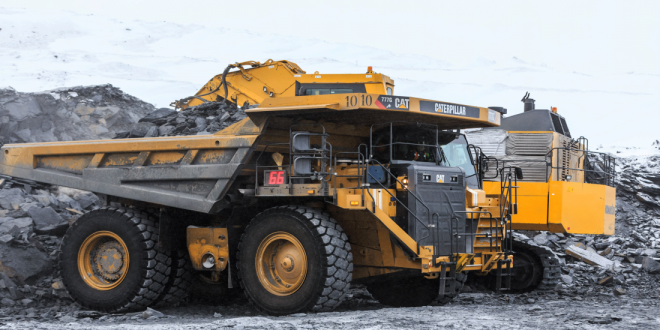 GV Gold increases production with the help of digital technologies

GV Gold, also known as Vysochaishy, one of the fastest-growing Russian gold mining companies, has rolled out the Zyfra OpenMine fleet management system (FMS) at its Ugakhan Mine in Russia’s Irkutsk Region in Siberia. The implementation of the project has resulted in a year-on-year ore production volume increase of 11%.

Zyfra OpenMine FMS developed by Zyfra Mining (former VIST Group), a division of Zyfra Group, a Finnish-Russian industrial digitalization leader, collects and manages real-time information from mining equipment. Where required, special sensors have been installed on excavators, mining trucks, dozers and other equipment. After every load and unload, drivers can obtain the best route to the next location. All relevant information is available to excavator operators and truck drivers on the smart panels in their cabin, to the control room operators, and on mobile devices as per the mine’s choice.

The dynamic optimization module of Zyfra’s OpenMine FMS can distribute haul trucks along routes based on a sophisticated multi-criteria optimization factor. The system also allows shift changes, break times, refuelling, etc, to be optimized in real-time and haul trucks’ loading parameters to be managed and monitored.

“The Zyfra Open Mine fleet management system has allowed us to optimize routes for mining equipment, reduce idle times and increase the productivity of dump trucks by 27 %,” said Mikhail Nartov, Deputy CEO for Operations at GV GOLD. “One of the important components of the system is the road quality monitoring. The heat map of the vehicle speed allows obtaining information about the road sections where the speed decreases. After those sections of the road had been repaired, the average speed of the dump trucks increased by 3 km/hour, while fuel consumption decreased by over 7 %.”

“At the Ugakhan Mine, there is a particular emphasis on the safety of mining operations. Using the speed control system has allowed us to substantially reduce the risk of accidents and increase road traffic safety,” said Evgeny Kharin, mine manager.

“Another Zyfra Mining solution implemented at the Ugakhan Mine – Zyfra Precision Drill – has significantly improved the drilling process with high-precision navigation on the blast hole grid and its further advantages. With the same number of drills, the blast volume has increased by 20 %. With the help of digital solutions, we can instantly increase the productivity of most mining operations by several per cent, without need to purchase new production equipment,” said Pavel Rastopshin, managing director at Zyfra.

Previous De Beers mull over business overhaul, workforce to be cut down
Next B2Gold appoint cementation company at Otjikoto Mine, wants to establish underground horizon