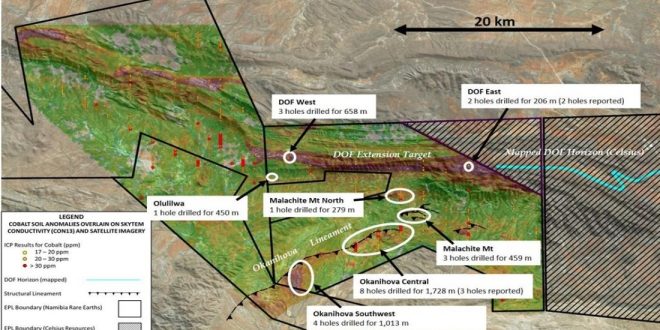 “This discovery provides Namibia Critical Metals with the foundation for a new light rare earths project. The project complements our advanced heavy rare earths project at Lofdal which has now firmly secured a strategic partnership with JOGMEC.

It offers our shareholders an opportunity in the early stage exploration of a high grade neodymium-praseodymium project on a district scale. We have undertaken to focus the Company on critical metals opportunities and our generative team led by Rainer Ellmies has delivered again with an outstanding discovery,” said Pine van Wyk, CEO of Namibia Critical Metals.

According to the company, the LREE-mineralization is associated with discrete carbonatite dykes over strike lengths of tens to several hundred meters with widths of between 20 centimeters to a maximum of 4 meters.

In addition, the company says the dykes follow a broad east-west zone and are interpreted as distinct primary magmatic features hosted by fenitized country rocks. Initial reconnaissance mapping has delineated at least 250 of the LREE carbonatite dykes over an area of more than 30 km2.