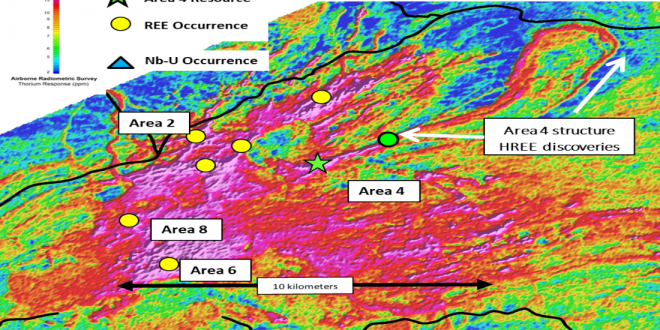 The Namibian Ministry of Mines and Energy has granted TSX-listed Namibia Critical Metals a 25-year mining license for its Lofdal heavy rare earth dysprosium-terbium mine.

The mining license is valid until May 10, 2046, and is awarded to Namibia Rare Earths, the Company’s wholly-owned subsidiary. The business and Japan Oil, Gas and Metals National Corporation have formed a joint venture called Lofdal (JOGMEC).

Lofdal is unique as one of only two primary xenotime projects under development in the world. The deposit has the potential for significant production of dysprosium and terbium, the two most valuable heavy rare earths used in high powered magnets. The project is being developed to provide a sustainable supply of heavy rare earths to Japan.

Certain conditions of the mining license are that there be a minimum 20% representation of historically disadvantaged Namibians in the management structure, including the board of the applicant holding the license and that at least 5% of the voting shares in the applicant be held by historically disadvantaged Namibians. Namibia Critical Metals has initiated the restructuring of the management and shareholdings of its Namibian subsidiary to comply with these conditions.

Darrin Campbell, president of Namibia Critical Metals stated, “This is an incredibly important milestone and achievement for the Lofdal project, the company and the Republic of Namibia. We have reached another significant value inflection point following closely on the heels of our mineral resource update announced earlier this year in May. With the previously announced receipt of the environmental clearance certificate for Lofdal on 30 June 2021, we now have a fully permitted mining project at Lofdal.”

Namibia Critical Metals holds a diversified portfolio of exploration and advanced-stage projects in Namibia focused on the development of sustainable and ethical sources of metals for the battery, electric vehicle and associated industries. The two advanced-stage projects in the portfolio are Lofdal and Epembe. The company also holds significant land positions in areas favourable for gold mineralisation.

The company’s exclusive prospecting licenses (EPLs) prospective for gold are located in the Central Namibian Gold Belt which hosts a number of significant orogenic gold deposits including the Navachab Gold Mine, the Otjikoto Gold Mine and more recently the discovery of the Twin Hills deposit. At the Erongo gold project, stratigraphic equivalents to the meta-sediments hosting the recent Osino gold discovery at Twin Hills have been identified and soil surveys are progressing over this highly prospective area.

The Epembe tantalum-niobium-uranium project is at an advanced stage with a well-defined, 10 km long carbonatite dyke that has been delineated by detailed mapping and radiometric surveys with over 11 000 m of drilling. Preliminary mineralogical and metallurgical studies including sorting tests (XRT) indicate the potential for significant physical upgrading. Further work will be undertaken to advance the project to a preliminary economic assessment stage.

Finally, the Kunene copper-cobalt project comprises a very large area of favourable stratigraphy along the strike of the Opuwo cobalt-copper-zinc deposit. Secondary copper mineralisation over a wide area points to preliminary evidence of a regional-scale hydrothermal system. Exploration targets on EPLs held in the Kunene project comprise direct extensions of the cobalt-copper mineralization to the west, sediment-hosted copper, orogenic copper, and stratabound manganese and zinc-lead mineralisation.