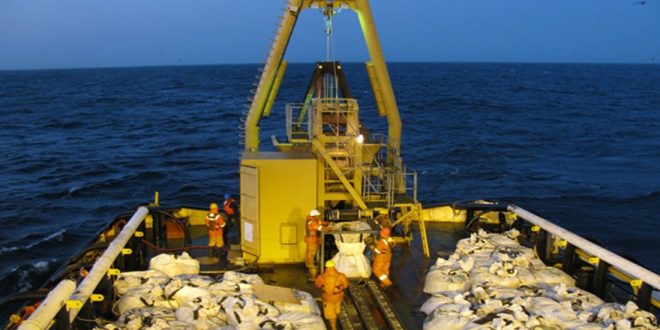 The move is set to bolster the country’s agricultural activity, as currently, much of the fertiliser consumed in Namibia is imported.

NMP adds that Namibia, with one of the world’s largest undeveloped phosphate resources, stands to benefit from the development of a phosphate project and fertiliser industry that will support many sectors, including agriculture, mining and employment.

In this regard, the Sandpiper project could be the first “building block” for developing a fertiliser industry in Namibia, states NMP.

NMP has been envisioning a marine phosphate mining project for many years, using offshore contract dredging 120 km south of Walvis Bay and a shore-based processing plant. NMP also plans to supply the Namibian market primarily with fertiliser and export the products as production ramps up.

However, since 2012, environmental objections to the Sandpiper project have impeded its progress.

In the interim, NMP has been able to adjust its proposed mining method to cater for more modern technology, says NMP COO Mike Woodburn. “There have been several adjustments to the project from its original proposal.”

He says that, in terms of dredging equipment, autonomous and remote-controlled underwater vehicles can be used to assist in positioning ships and seabed trawling to obtain monitoring information over long periods of time without the need for expensive support vessels.

Onshore, he notes, there has been a major development in the past five years with the expansion of the Walvis Bay port and the construction of the Southern African Development Community bulk gateway terminal which also serves as the primary oil terminal. This will assist NMP in docking its ships, offloading concentrate and establishing its land-based processing plant.

In addition, NMP CEO Chris Jordinson says the company has secured, in principle, an allocation of portland from Namport, thereby enabling it to, in future (once a contractual land allocation has been granted) develop its processing plant.

Once NMP has overcome the environmental objections and been given the go-ahead to progress with its plans, Woodburn says the project may be fully operational within 24 months.

“We will need to conduct some additional industrial environmental-impact assessments in relation to processing onshore,” he says, adding that this will probably take about 12 months to complete.

Woodburn also says NMP would need to update its financing model for the project, as the initial financing was conducted through a number of South African banks in 2013.

Namibians use phosphate every day, often without realising it, says NMP.

Phosphate is a critical component in fertilisers and animal feed supplements and can also be found in a variety of consumer products, such as soft drinks, toothpaste, health and cleaning products. It is also used in industrial and manufacturing processes.

Phosphate allows for increased crop yields and thus productivity on farmland, which reduces the need for further deforestation, maintaining the integrity of global forests. As a result of sustainable agricultural productivity, an estimated one-billion hectares of land globally has been preserved between 1961 and 2005.

When farming for crops, fertiliser is applied to improve crop yield.

NMP states that Namibia has one of the largest undeveloped phosphate resources in the world, estimated to be more than four-billion tonnes, of which the area of highest concentration − greater than 10% phosphoric acid (P205) is limited and predominantly located off the south-west coast of Walvis Bay in water depths of between 200 m and 300 m.

However, currently, there are two granted mining licences which cover most of the defined phosphate resource area. These are assigned to NMP (ML170) and Namibia Phosphates (ML159).

Based on a commercially viable cut-off grade of 15% P205, the DFS indicated that there is sufficient phosphate resource within licence area ML170 to sustain mining operations and benefits for future Namibian generations for more than 100 years.

In addition to the DFS, NMP claims that independent scientists and specialists have concluded that, at the proposed scale of operations, the Sandpiper project will have no significant impact on the marine environment and that fishing and phosphate mining can co-exist and that phosphate mining will not kill the local fishing industry.

NMP enlisted international scientists to conduct these studies, costing over N$28.7-million, and ensured all the experts have worked in some capacity on the Benguela coastal system. These conclusions are based on 26 independent specialist environmental studies that were completed as part of the environmental impact assessment process, states NMP.

Previous AfriTin resume full activity, targets 50% phase one lift in production
Next Second economic stimulus on the horizon for Namibia