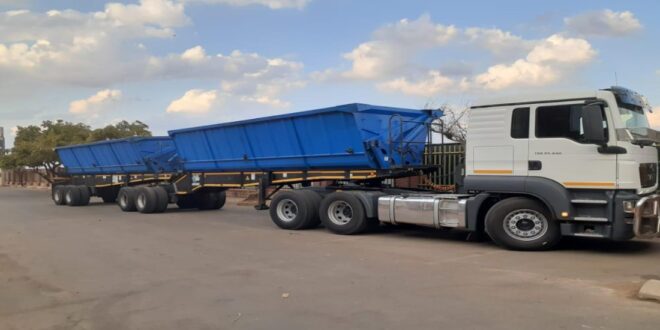 The proven mining-sector material handling capability of Unitrans Africa (UA) is laying the groundwork for a bright future marked by unique innovation in key areas of the company’s operations.

Unitrans Africa’s bold, long-term vision includes electric vehicles as well as real-time stockpile management and reporting. But none of these concepts would have gotten off the ground if it hadn’t been for the company’s long-standing reputation for on-mine material handling and mine-to-port capabilities, which have been painstakingly built across the continent over decades.

“Unitrans Africa is truly demonstrating our purpose of Accelerating Africa’s Growth with the current mining projects and partnerships we currently have in place,” says Unitrans CEO, Rob Hayworth, who believes that the company now has the springboard to recreate, throughout Africa, the success of current operations, which are accredited according to the highest available safety standards, including the International Organisation for Standardisation (ISO), Occupational Health, Safety and Security (OHSAS), Safety and Quality Assessment System (SQAS) and Road Transport Management System (RTMS).

“Our solutions have a positive impact on the regions we operate in and with the partners, we are involved with, especially when it comes to utilising local labour and reducing the total project emissions via the use of road trains,” he adds.

Road trains have the unique ability to handle up to 140 tons of payload, while at the same time increasing safety standards and decreasing environmental impact. The latter is achieved through reduced emissions on a net project basis due to a reduction in the required fleet size.

It’s for these reasons that road trains occupy pole position in Unitrans Africa’s bold take on the future – one that is possible thanks to the company’s proven end-to-end capabilities. “Our ‘mine-to-port’ capability is a major strength and this is where our immediate focus has been,” says Hayworth. “We’ve been able to set a stake in the ground and are now looking to build on these strengths, as the largest operator of road trains in Africa.”

“We are in the final stages of research into several innovative offerings including electric mining vehicles, which will be revealed soon,” he adds.

Unitrans Africa’s extensive footprint in sub-Saharan Africa includes countries such as Namibia, Botswana, Zambia, Mozambique, Malawi, Lesotho, Tanzania and Madagascar. This presence already makes the company one of the largest materials handling, distribution and logistics operations on the continent, which Hayworth ascribes to an unwavering focus on precision delivery.

“Our exacting standards, high quality, performance track records and continuous improvement all translate into a gold standard when it comes to service delivery,” he says. “When it comes to mining, this is reflected in Unitrans’s custom-designed vehicles and engineered equipment, handling of dangerous goods, superb delivery, and cost-efficiency, amongst other things.”

As an example of this precision delivery accelerating Africa’s growth, Hayworth points to the successful kickstarting of their Botswanan copper operations, which have demonstrated positive economic and environmental effects. Job growth has increased locally, GDP has grown across the SADC region as a whole, and copper has contributed to a reduction in carbon emissions due to its use in electric vehicles.

“We now have proven copper handling capabilities, which we can use as a launchpad into similar operations in the likes of DRC, Zambia and Namibia in the future,” says Hayworth.

A future which, if Unitrans Africa’s track record is anything to go by, looks bright indeed.