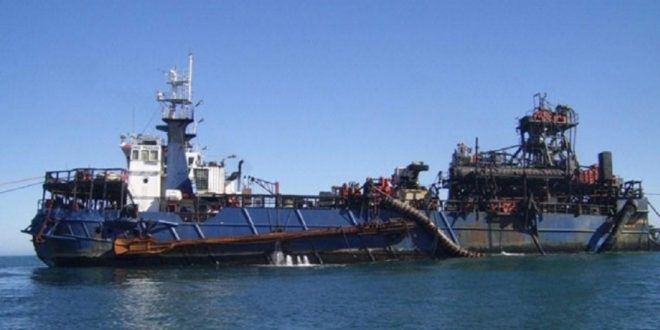 Amid the controversy over sea mining, the Ministry says it remains neutral

Andrew Maramwidze April 6, 2021 Editor picks, Features, News Comments Off on Amid the controversy over sea mining, the Ministry says it remains neutral 479 Views

Since 2011, Namibians have been debating whether or not to mine for marine phosphate.

The Ministry of Environment, Forestry, and Tourism has declared itself neutral on the topic after ten years of the country’s most contentious debate. Despite this, government leaders, billionaire capitalists, and activists have been treading a fine line in one of the country’s most divisive environmental projects.
“The ministry is a competent authority that must review matters objectively without a position, so we are a neutral organisation in terms of reviewing potential marine phosphate mining,” ministry spokesperson Romeo Muyunda says.

Marine phosphate mining is the process of extracting phosphate from the ocean floor by digging up gathered sediments, such as debris, plant and animal matter, and other deposits on the sea floor.

As previously reported by The Namibian, the marine phosphate mining project – titled the Sandpiper project – is the brainchild of Namibia Marine Phosphate (NMP), a company which is 85% owned by Omani billionaire Mohammed Al Barwani through his company Mawarid Mining LLC.

Businessman Knowledge Katti, through his company Havana Investments, has a 15% share in the project.

In 2011 the Ministry of Mines and Energy issued mining licences for the project, subject to the completion and approval of the necessary environmental impact assessments (EIAs).

In 2012, NMP applied for an environmental clearance certificate from the environment ministry.

Opposition followed, and in 2013 the Cabinet put a two-year moratorium on marine phosphate mining off Namibia’s coast.

In 2016, the environment ministry approved an application by NMP to extract marine phosphate from the sea, despite concerns over a lack of sufficient consultation and harm to the ocean’s ecosystems.

At the time, environmental commissioner Teofilus Nghitila, who is currently the executive director of the environment ministry, said the EIA and management plan submitted to him by the company was sufficient as it made provision for environmental management in terms of the proposed marine phosphate mining.

The ministry later revoked this approval due to criticism, and NMP took environment minister Pohamba Shifeta and other ministry officials to court in an effort to force their hand.

Environmental groups, workers in the fishing industry, and other concerned parties have since pushed back against the project, while entities such as the Chamber of Mines of Namibia are vouching for it.

Those in opposition are concerned about the potential threats it may pose to Namibia’s marine ecosystem.

Organisations representing the Namibian fisheries industry also went to court, asking for the cancellation of a mining licence issued to NMP.

They claimed NMP failed to do an EIA and apply for an environmental clearance certificate within the legally required time period.

Others argue that a marine phosphate industry would have socio-economic benefits which would outweigh the risks of environmental damage.

While the matter remains in court with a ruling to be delivered soon, the environment ministry maintains it will remain neutral and will objectively assess the information presented to it.

He says the environment includes people, which is why the ministry expects the necessary consultation to be conducted before any environmental clearances are provided.

Meanwhile, NMP last week told the media that the delivery of the High Court judgement in which the legitimacy of NMP’s mining licence is questioned has been postponed to 12 April.

The company said it hopes to receive its environmental clearance certificate soon.