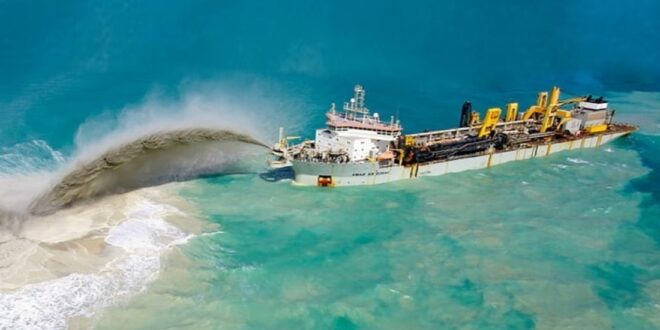 MARISMA project manager Elisabeth Mausolf has stated that the use of the map by Namibian Marine Phosphate gave the impression that it supports phosphate mining and has given it the green light, while it is not the case.

This comes after Advisors of the Benguela Current Commission’s Marine Spatial Management and Governance Project are questioning how Namibian Marine Phosphate got hold of a map that was supposed to only be in the hands of senior government officials.

The map shows how all exploration activities, including phosphate mining, can co-exist.

“There is some sort of misunderstanding, or that is what we think from our perspective. People are saying things that did not make sense nor do they understand what is the purpose of MARISMA. It is impartial and the use of the map sort of gave the impression that we have agreed to phosphate mining,” she said. According to Mausolf, it is a regional project about the cooperation of Namibia, Angola, and South Africa concerning marine spatial planning (MSP). According to her, they realised during the last meeting held in Walvis Bay that there is a total misunderstanding concerning the concept of MSP.

“It is mainly an integrated approach to building a mechanism in the aspect of protecting the marine environment and utilisation of the marine environment. Thus, creating awareness so that others don’t misuse the concept for their interest by taking out some drafts and maps that are not even officially launched by the government,” she explained. The technical advisor of the project, Rodney Braby also said this specific graph showing where all sectors operating in the ocean gives the impression that the project was given the green light.

“The use of the map gives the impression phosphate mining has been given the green light and that MARISMA is facilitating the mining process. However, we are an independent organisation that provides high-level direction to consistent and coherent process that guides where and when human activity occurs within the marine space,” Braby said.

NMP used the map as part of their background information document compiled by ECC Environmental Compliance Consultancy, for NMP.

According to MARISMA, the specific map is part of the draft marine spatial plan currently only in the hands of a high-level inter-ministerial team for consultations and validation. The team involves officials from the fisheries, environment as well as the mines ministries, along with other stakeholders.

MSP during a media briefing last week said the document was not released to the public nor has it been approved to be used in public meetings or even as background information as it still needs to be tabled and adopted by Cabinet.

When contacted, ECC Environmental Compliance Consultancy principal environmental practitioner Jessica Bezuidenhout on Thursday admitted that they have used the map as part of their background information document.

According to her, the draft document has already been circulated widely to participating stakeholders both private and institutional for comment.

“As such, we considered that the document is already in the public domain. Any perceived breach is, therefore, completely unintentional as in the roles of EAPs, all relevant project information must be provided to the public.”

Marine phosphate mining is set to commence pending an environmental impact assessment for the licensed area.

The possibility of phosphate mining on Namibia’s seabed has sharply divided opinions in recent years.

The initiative has been beset by controversy since its inception. Last year, the High Court declined to invalidate a mining licence awarded to NMP in 2011 after Namibian fishing industry organisations petitioned the court to declare the company’s mining permit invalid. Organisations claimed the NMP project would threaten Namibia’s marine life. NMP is, however, adamant the project will produce numerous economic benefits and jobs for Namibia from a phosphate-based industry.

Last year, over 350 experts from all over the world called for a moratorium on ocean or seabed mining. Seabed mining is a growing industrial field that involves extracting submerged minerals, including phosphate and deposits from the seafloor. Mining for sand, tin and diamonds has been generally limited to shallow coastal waters. The International Seabed Authority (ISA) stated in July last year arguing that far too little is known about these sensitive and important ocean ecosystems, which are already under stress from climate change, bottom trawling, and pollution, as well as potential impacts of mining. According to Douglas McCauley, a professor at the University of California, many alternate viable pathways would allow the businesses to function without ever needing to start mining the deep ocean.

However, purveyors of phosphate mining are adamant that it holds vast economic potential.

“Marine phosphate mining and processing will create new mining operations, such as NMP’s Sandpiper project, and can also provide Namibia with the phosphate concentrate required to develop a fully integrated fertiliser industry that has the potential to make a significant positive contribution to the country’s local and national economy in the areas of job creation, poverty eradication, industrialisation and government revenue generation,” stated NMP recently.