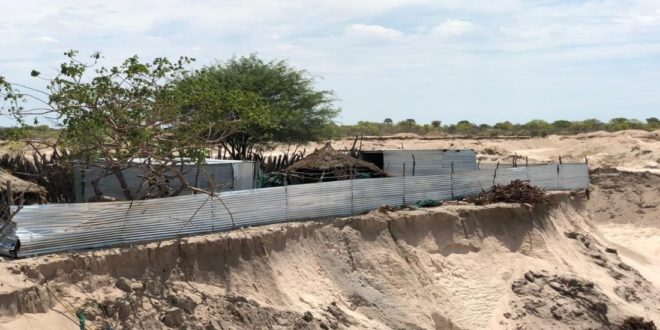 Oniipa constituency councillor Vilho Nuunyango has confirmed that sand mining at the Ondando village has been temporarily suspended.

This has been done pending a directive from environmental commissioner Timotheus Mufeti.

Nuunyango said that he and police officers from Onayena visited the pit where the businessmen extracted sand after he was informed that residents of Ondando had again blocked the gravel road leading to the pit. The road was blocked on Sunday and reopened on Tuesday afternoon by Petrus Shambo, one of the businessmen mining sand at the village.

Shambo said the decision taken on Wednesday was a ‘gentleman’s agreement’ because it was not official but the extraction of sand has been temporarily suspended.

Shambo said he only acts on instructions from the business community or Ondonga Traditional Authority on whether the sand mining activity should come to a standstill.

“I asked the councillor to write a letter informing us officials about the suspension of the sand mining activities. Had he given us an official letter, I would have accepted the decision instead of coming to a gentleman’s agreement. I am not the spokesperson of the Ondonga Traditional Authority and I cannot answer questions on behalf of the traditional authority. I wish he had gone to the traditional authority,” he said.

Ondando resident Jesaya Nambundunga said the sand miners have destroyed the fence they have put up around the pit. They are now mining outside the fence.

The residents of Ondando have petitioned the environment minister, Pohamba Shifeta, to revoke the environment clearance certificate issued to the Ondonga Traditional Authority approving sand mining in the region.

About 30 villagers signed this petition.

They fear that if the ministry allows sand mining to continue, it would lead to a number of open pits, no pasture for their livestock and no fields for crops. They also fear children would drown in the sandpits.

However, Shambo claimed this week that sand mining promotes Oniipa’s development, and said those opposing this are disrespectful to Ondonga King Fillemon Nangolo.

“Sand mining has been there since the colonial dispensation. The dust they are complaining about [. . .] they coexisted with it. Why are they not complaining about a sewage dam built by the Finnish missionaries?” he asked.